On Sunday 3rd February, Air Cadets from the Bedfordshire and Cambridgeshire Wing, Eastern Sector, celebrated the formation anniversary of the Air Training Corps (ATC) with a parade through Newmarket. 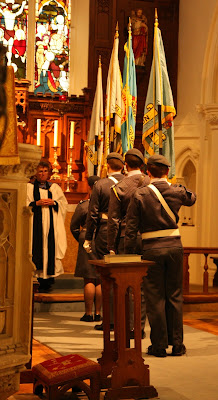 The Air Training Corps celebrates its 72nd Anniversary, having formed from the Air Defence Cadet Corps in 1941 when the government at the time realised the important training that was being delivered to young men who then went on to serve in the military.  The present day organisation continues to promote an interest in the Royal Air Force, aviation and adventure whilst developing skills in leadership and citizenship for both men and women.

Squadron Leader Tim Brain, Eastern Sector Commander, said “The cadets and staff were smartly turned out and represented the Air Training Corps with pride.  It was a real honour to see so many young people come together and show off this fantastic youth organisation”

Cadet Corporal Jack Sawcer of 2461 (Sawston) Squadron added “I really enjoyed being part of this year’s ATC Sunday parade in Newmarket.  It was nice that people came out of shops and their houses to watch us march past.”
Posted by 2461AirCadets at 09:37