Six Air Cadets and a member of staff from 2461 (Sawston) Squadron have recently visited Marshall Aerospace and Defence Group based at Cambridge Airport. 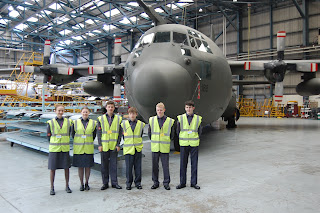 Cadets from 2461 (Sawston) Squadron in front of a Royal Air Force Hercules aircraft.

The visit was arranged so that the cadets could gain an insight into the history of the company and learn about the variety of learning opportunities there are including apprenticeships and a foundation degree.  Cadets were also given a tour of some of the hangers being able to see aircraft in various stages of maintenance such as the Hercules, more affectionately known as ‘Fat Albert’, private jets and the massive Tristar aircraft.

Marshall Aerospace and Defence Group is the United Kingdom’s leading independent aerospace company and are renowned and respected worldwide.  The company specialises in the conversion, modification, maintenance and support of military, civil and business aircraft.  Its capabilities include engineering design, manufacture and test along with the provision of personnel, training and advice.  Based on its 475 acre site in Cambridge since 1937, Marshall Aerospace has an annual turnover in excess of £240 million and employs over 1,600 people.

Cadet Jack Hawkins said “Being so close to different types of aircraft was an amazing opportunity that I really enjoyed.  It was fascinating to learn about how Marshalls begun and all the important aviation achievements they have contributed too.”

Flying Officer Chris Cox added “This visit was about more than seeing the aircraft at close quarters, the cadets learnt what they need to do at school and cadets if they want a future career in the aviation industry.  The training Air Cadets receives is held in high regard by employers up and down the United Kingdom, not just in the aviation industry.”

The Squadron would like to thank Marshall Aerospace and Defence Group for hosting our visit, in particular Jonathan Salmon and Jonathan Bedford our tour guides.

2461 (Sawston) Squadron meet on Monday and Thursday evenings at our headquarters on Hayfield Avenue.  For more information about joining as either a cadet or member of staff please contact 01223 834585 (Monday and Thursday Evenings) or email oc.2461@aircadets.org