Air Commodore Dawn McCafferty CBE, Commandant of the Air Cadets visited Duxford, Cambridge on Saturday 10th November to officially open the 2461 (Sawston) Squadron Building
Mr John Delaney from the IWM Duxford, parents of current cadets, past cadets and staff members, along with the Wing Commander and Eastern Sector Officers joined the Air Commodore for the afternoon.
The event, which was held at the Officers’ Mess at the IWM Duxford, saw the 2461 (Sawston) cadets perform a continuity drill outside their new Squadron Building 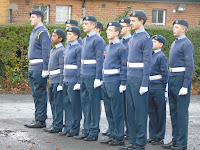 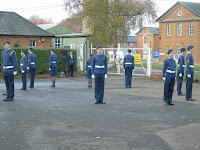 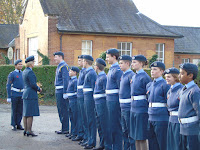 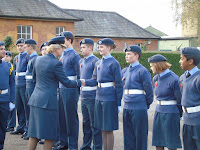 The Sector Flag Bearers welcomed the Air Commodore as she arrived at the Officers’ Mess. 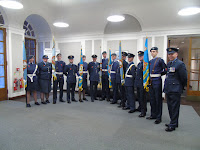 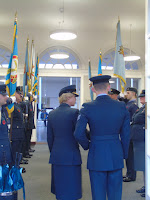 The Ensemble led by Sgt Solly performed a completion of songs from The Greatest Showman before the Annual Presentations of Awards. 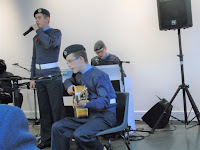 The Cadets and Staff enjoyed welcoming the Air Commodore to Duxford, they took pride in telling her all about their new Squadron Building and how they had settled in since moving to Duxford in June 2017.
After a short group photo, the Cadets then escorted the Air Commodore to the 2461 (Sawston) Squadron building where she officially declared the building open by unveiling a plaque. 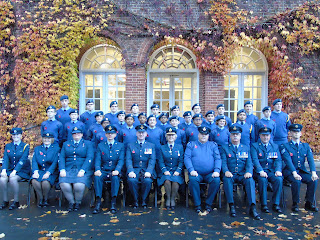 The Air Commodore tweeted “A truly uplifting afternoon with @2461Sawston to open their new building. Precision Continuity drill, a superb ensemble and a range of awards presented prior to a tour of the new premises and a yummy buffet. Thanks to all who made it possible”
Commanding Officer, Tim Barker from 2461 (Sawston) Squadron said that “The afternoon was a huge success.  I am extremely proud of all our cadets.  The cadets that were part of the Continuity Drill have been practising tirelessly for weeks, as have the Ensemble, who sang their hearts out.   We are delighted with the our new squadron building as it offers more opportunities to carry out activities with Cadets that we could not do in our old building, which was a spooner hut”.
Flight Sergeant Sue Jestice said “We are thankful to the staff of the IWM Duxford for making us feel very welcome and today was memorable in many ways, having past OC’s and Cadets join us and talk about their memories. The icing on the cake for me was that attendance of the Air Commodore who truly supports the Air Cadets”.